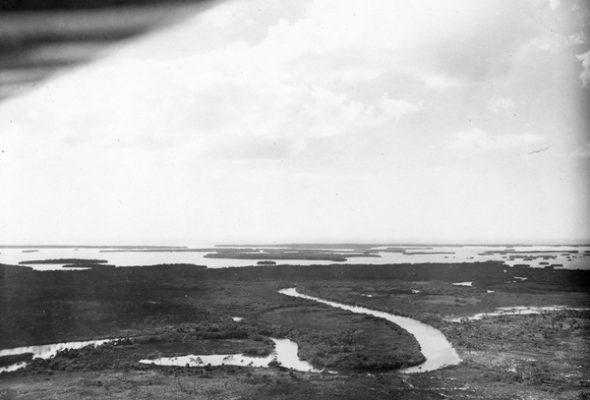 The History of Estero Bay

The History of Estero Bay

Daily, we cruise through the waters of Estero Bay Preserve and never once have we been let down by its natural beauty to ever forget that we do truly get to work and live in the heart of paradise. This area of water around Fort Myers is near and dear to our hearts and we were pleased to recently celebrate it’s 50th anniversary last year with a group of our fellow nature enthusiasts.

Though technically, this area has now been a registered preserve for over 50 years, the history of Estero bay dates back far longer than just half a century. Thousands of years ago, the Calusa tribe established a large settlement directly in the heart of Estero Bay, with Mound Key being the epicenter of tribal activities. After the Calusa tribe, this area was, for many years, used as a port and fishing town for as long as history has been recorded in this area.

In the late 1950s, the largest threat to this naturally beautiful and plentiful area came in the form of human development of the flourishing Estero Bay area….

The Naples Daily News reported in 2007:

“It all started in 1958 when Barry C. Williams and Investors purchased 5,500 acres along the northern and eastern coast of Estero Bay for $1.6 million. Robert Troutman, an Atlanta attorney representing investors, drew up a plan to expand a seawall deep into Estero Bay along 18 miles of coastline. The seawall, called a bulkhead, would straighten out the jagged coastline by using 17 million cubic yards of fill. Along the way it would swallow up submerged lands and islands, creating 1,100 acres that previously was under water. For fill, Troutman proposed dredging a 12-foot channel through the seagrass beds around his bulkhead.”

Even in the 50s, the effects of such development were recorded from the surrounding areas of Tampa and Miami. It was proven, even then, that development such as the bulkhead would destroy estuary environments when developers removed the mangroves and seagrass beds that served as a nursery for local animals.

It was then that the Lee County Conservation Association, made up of local residents and fishermen, was established. This group wrote letters, met with politicians and used their power as voters to change leadership in Lee County to deter the development.

In the end, their passion for the local environment led to the creation of the first aquatic preserve in Florida—The Estero Bay Aquatic Preserve.

We are proud to be associated with the conservationists of both then and now that fought for the protection of this fragile environment. We serve to educate all of our guests about the necessity for preserves and protected natural areas.

50 years later, we are thankful for those early conservationists that have provided future generations, such as ourselves, the opportunity to experience our natural world as it was intended to be.

We are closed from Sept 6 until Oct 6.

Real time availability and online booking for each tour and charter is available on the website.