Good Time Charters > Captain’s Blog > Uncategorized > There are some unusual looking but tasty fish in the Gulf of Mexico near Fort Myers Beach
Book an Activity Today! 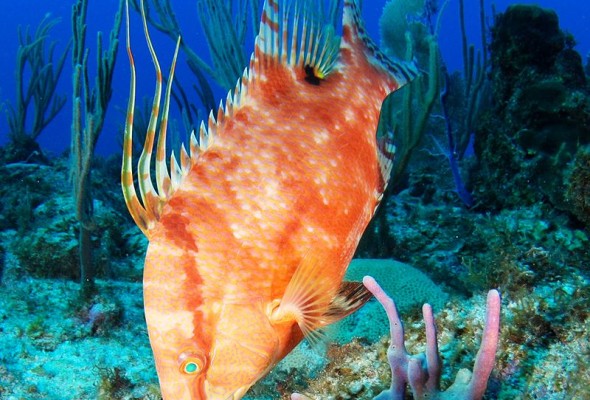 We have a lot of unusual and rare fish living within our Gulf of Mexico waters off the coast of Southwest Florida. The hogfish, also known as the hog snapper, takes top standing as one of the most unique within these waters.

This fish gets its unusual name from its long, hoggish snout and protractable mouth which it uses to root around the sea bottom for crustaceans and mollusks. A member of the second largest family of marine fishes, the wrasses, however instead of a cigar-shaped body like most wrasses, the hogfish is narrow of width and round from the side view. The color of the hogfish is highly variable, and depends on age, sex and living conditions. By and far, they are pearl white, mottled with reddish-brown. Small hogfish may be all grey, and they all have bright red eyes regardless of age.

The hogfish have a fascinating biology. These fish live as protogynous hermaphrodites. They live in small groups of one dominant male and several females, until a female grows to be about 3 years old and 14 inches long, at which time she then changes to a fully functioning male. In waters off south Florida, peak spawning occurs during the months of February and March.

Sought by humans for it’s unique flavor, the hogfish currently sit with a ‘vulnerable’ rating on the IUCN Redlist.

We currently do not have any office staff, and your patience is appreciated if you need to call us. Our lead guide, Cristina, will answer/return your calls between her tours.

Real time availability and online booking for each tour and charter is available on the website.