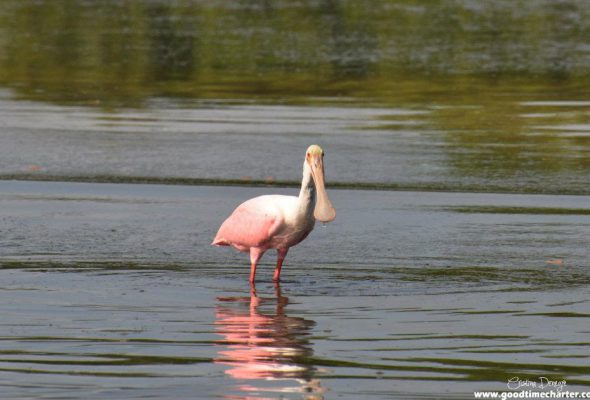 Have you seen the new challenge on Facebook to post a picture of the beach? The challenge is promoting positive pictures and news when we have been inundated with negative news.  Looking at your newsfeed flooded with beautiful pictures of the beach is a great way to spend some of your time while you are shut inside away from normal life.  Here on Fort Myers Beach we are currently not allowed to go to the beach.  The beach for many of us is a place for peace and relaxation and this time has been hard on many of us!

There are other ways to keep ourselves busy even if the beach and restaurants are closed. Here at Good Time Charters we have been fishing, and keeping up the maintenance of the boat! We also have been cleaning the office!  At home we are exercising, cooking, doing puzzles, playing board games and getting take out from some of our favorite places.  Keeping busy has been key to keeping our sanity.

Keeping busy is something that many of us have probably thought about during these couple of weeks.  Taking a walk is a great way to get outside and to enjoy some sunshine.  You can discover new places and even possibly see some wildlife.  There is a great activity that the Florida Gulf Coast University “Wing of Hope” group made for elementary students and families encouraging them to observe the natural world.  https://www.fgcu.edu/cas/communityimpact/wingsofhope/i-spy-nature-booklet-ada.pdf  This activity can be done anywhere not just in Florida!

There are actually a lot of animals that enjoy being alone and live solitary lives.  There are benefits to living a solitary life in the animal kingdom.  According to Sciencing.com, a couple of benefits of being solitary is not having to share food and hiding from prey or predators.  Some of these animals include the snow leopard, bears, moles, and great white sharks.

One of Florida’s famously solitary animals is the Florida panther.  The Florida panther is an endangered species.  According to the FWC: ‘Panthers are solitary, elusive animals and are rarely observed in the wild. Since 1981 scientists have fitted many Florida panthers with radio collars to help keep track of their movements. Still, much of what we know about panthers comes from what they leave behind: tracks, scrapes, scratches, scat (feces), and prey remains.”

Gopher Tortoises like being home in their burrows.  The FWC says: ‘The life of a gopher tortoise revolves around its burrow(s) where gopher tortoises spend up to 80% of their time. Burrows average 15 feet long and 6.5 feet deep, though they have been documented reaching up to 40 feet long and 10 feet deep. They often use multiple burrows throughout their lives, the number of which varies depending on the individual. Gopher tortoises are ectotherms, meaning they depend upon their environment to maintain their body temperature. Their burrows maintain a stable temperature and humidity year-round, providing protection from extreme temperatures, drought, and fire. Due to its warm climate, tortoises are essentially active year-round in Florida, though peak activity outside burrows occurs from May through August. In northern Florida, tortoises typically remain within their burrows during cold winter months but will bask or forage near their burrows on warm winter days. Burrows also offer shelter from predators and serve as refugia for more than 350 other species, called commensals. Some examples of commensal species include burrowing owls, Florida mice, indigo snakes, rabbits, gopher frogs, and invertebrates.”

Wahoo fish are mostly solitary but sometimes are found in small schools.  A wahoo is related to mackerels.  According to the Florida Museum: This very long fish has a beak-like snout filled with tiny serrated teeth, several small fins along its dorsal ventral ridges, trailing off with a series of finlets, and then a sharply forked caudal fin. It usually grows to between 3 and 5 feet long, but has been measured at 96 inches long, and is rich blue to green on top and silver below, with striking cobalt vertical blue bars running along its body.

Popular for sport fishing and as a food catch, this solitary fish doesn’t school enough for a thriving commercial fishery.

Great blue heron aren’t necessarily a solitary animal, but the do enjoy hunting alone.  National Geographic states: “Though great blue herons hunt alone, they typically nest in colonies. They prefer tall trees, but sometimes nest in low shrubs. Females produce two to seven eggs, which both parents protect and incubate. Chicks can survive on their own by about two months of age.” The Fish and Wildlife Service tell us that “These patient predators stalk a wide variety of wetland prey near ponds, streams, lakes, rivers, marshes and coastlines, spearing and swallowing whole everything from fish to frogs to snakes to rodents. Although they typically hunt solo, they often nest together in trees in groups called rookeries.”

The pocket gopher are also considered solitary animals.  The FWC tells us: “Pocket gophers are only 10-12 inches long from nose to tip of tail but they are capable of digging tunnel systems that may extend for 500 feet or more, although 145 feet is the norm. As they dig, they push piles of loose dirt to the surface, a characteristic that has earned them the name “sandy mounders” or “salamanders.” Shallow tunnels generally run parallel to the surface and provide access to their diet of roots and tubers, while nest and food storage tunnels are deeper. Pocket gophers plug tunnel openings to prevent snakes and other predators from entering. Pocket gophers are solitary animals and, except for females nursing young, do not share a tunnel system.”

The only species of bear in Florida is the black bear.  According to the FWC: Bears are solitary by nature, except when in family groups of mothers and cubs or in pairs during the mating season. Bears may congregate in areas of high food density, such as oak stands, berry patches, or farm fields. When abundant food sources are found across large areas, bears tend to tolerate each other more than usual, mostly because they cannot defend such a rich food source from competitors.” Also, “Preferred habitats contain trees and shrubs that produce nuts and fruits. There are 19 species of oaks native to Florida and each produces a different kind of acorn, most are seasonal favorites of bears. One of the most important plants to Florida’s bears are palmettos (Serenoa repens).”

Bobcats are another solitary species in Florida. National Geographic says: Bobcats are solitary animals. Females choose a secluded den to raise a litter of one to six young kittens, which will remain with their mother for 9 to 12 months. During this time they will learn to hunt before setting out on their own. Bobcat habitat is “widely distributed throughout Florida in deep forest, swamps, and hammock land. Thick patches of saw palmetto and dense shrub thickets are important as den and resting sites. In rural areas, bobcats can range five or six square miles and generally cover their territory in a slow, careful fashion. In urban to suburban areas, the range of territory usually decreases to 1 or 2 miles.”, according to the FWC.

While you are practicing social distancing perhaps you will get the chance to see nature and animals in a whole new way! Enjoy!