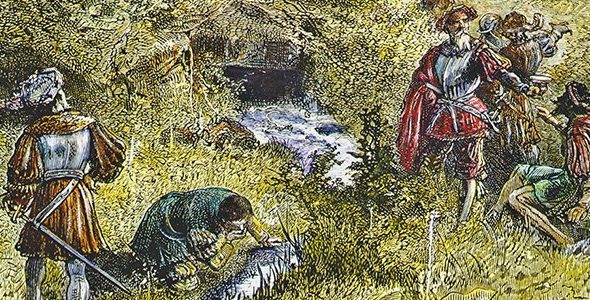 Is The Fountain of Youth In SW FLorida?

This holiday season brings larger crowds looking to enjoy Fort Myers Beach’s beauty and natural landscapes. The spirit of the Holiday season begins to take over and what better way to get into the Spirit than by a insightful tale about one of Southwest Florida’s most legendary explorers and his search for one of the most elusive locations in the world that just might be hiding in our very own backyard…

Legendary Spanish conquistador Juan Ponce de Leon sailed to the Americas and explored areas along Florida’s Gulf coast in 1513 & 1521. Leon is one of the first of the European explorers to have set eyes on what was then known as “La Florida”.

It is said that Leon set sail for the magical peninsula of Florida in hopes of discovering “The Fountain of Youth”, a mythological spring that would provide all who drank from its waters with eternal life and health. Spanish historian Lopez de Gomara wrote in his journal that Indians living in the islands of Hispaniola had told him about a fountain with healing waters north of Cuba and Haiti.

It was said that early Indians described the fountain as  “the life giving stream, whose magic waters washed away the calamities of age and pains of disease, round whose shores youths and maidens ever sported young and eternally joyous.”

Leon’s expedition as well as others were said to have searched across the entire state, stopping at river, brook, lagoon or pool along the Florida coast for the legendary fountain before heading back to Spain.

Eight years later, Ponce and his ships cruised back into our southwest Florida waters with the intention of establishing a colony and potentially finally locating the Fountain of Youth. It was during his time in southwest Florida that he was mortally wounded by a Calusa arrow and passed away. Legend states that our rare but local plant “Rosary Pea” coated the arrowhead, which struck Ponce. The poison contained within the seed is called abrin—a close relative of ricin and one of the most fatal toxins on Earth.

It is unknown if his party (or any others) ever located the mysterious fountain that continues to be one of the most popular tales in Floridian Folklore. There is really no evidence that Ponce de Leon ever found the Fountain of Youth. But is it entirely a fable? Florida has more springs than any other state and many of them contain minerals and nutrients necessary for maintaining good health. Trace nutrients that can be found in Florida’s springs include chromium, copper, gold, iodine, manganese, nickel, fluoride, phosphate, potassium, silicate, sodium, sea salts, zinc, sulfate, sulfur, iron, magnesium, and others.