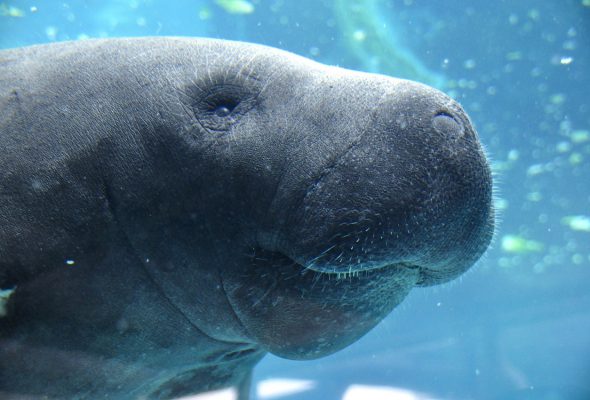 Right now, we are experiencing some of the coolest and most comfortable weather we will experience all year on Fort Myers Beach. If you’re thinking of taking a cruise, a tour or a charter—now is the time to do it! Plenty of animals also take advantage of the moderate Floridian winter weather. One of our favorites that we spot frequently here are manatees! These aquatic marine mammals are known as gentle giants and are frequently spotted hanging out around the mangroves and even at our marina.

The Florida manatee, Florida’s state marine mammal, is a large aquatic relative of the elephant. They are grayish brown in color and have thick, wrinkled skin on which there is often a growth of algae. Their front flippers help them steer, or sometimes crawl, through shallow water. They also have powerful, flat tails that help propel them through the water. Despite their small eyes and lack of outer ears, manatees are thought to see and hear quite well.

It is important that during this time, we and all other boaters follow all of the rules of being out on the water, including carefully navigating through “No Wake” zones. Because manatees are slow moving, they do not have the ability to move out of the way of oncoming boat traffic and end up getting injured, or killed, by boat propellers. On record, last year (2016) was the deadliest year for manatees that were struck by boats.

In some situations, manatees do require rescue and rehabilitation. Whether it be due to an injury or illness, there are a number of local groups that serve the manatee populations of Florida. Though some of the injured manatees are not able to return to the wild, there are many cases of successful release of manatees back into their natural environment. Many of these rescued and released manatees are outfitted with tracking devices that will allow scientists and researchers to study their actions, environment and more!