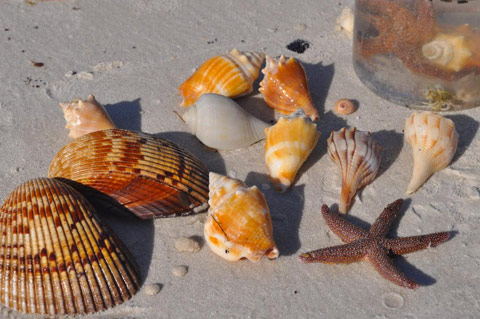 A day at the beach isn’t complete without looking for sea shells! Many of our guests have asked questions about shells and today I hope to answer them for you!

What lives in shells?

The shells found on the beach are mainly mollusks.  Mollusks have a very large number and variety of species (estimated over 110,000)!  Mollusks found living in sea shells include gastropods (i.e snails), bivalves (i.e calms, oysters, and mussels), polyplacophora (i.e chitons), cephalopods (i.e nautilus), scaphopods (i.e tusk shell).  Mollusks make one shell and live in it for their lifetime.

Hermit crabs live in shells that are left behind on the beach.  As hermit crabs grow they change their shell.

According to Fun Facts About Hermit Crabs:

“Like other crustaceans, hermit crabs molt as they grow. This involves shedding their exoskeleton and growing a new one. Hermit crabs have the extra complexity of having to find a new shell when they outgrow their old one.When a hermit crab is ready to molt, its new skeleton grows under the old one. The old exoskeleton splits and comes off, and the new skeleton takes some time to harden. Because of this, crabs often dig a hole into the sand to provide protection during the vulnerable time of molting.”

How are shells created?

Mollusks make their own shell by excreting mostly calcium carbonate from the mantle.

“Seashells are the exoskeletons of mollusks such as snails, clams, oysters and many others. Such shells have three distinct layers and are composed mostly of calcium carbonate with only a small quantity of protein–no more than 2 percent. These shells, unlike typical animal structures, are not made up of cells. Mantle tissue that is located under and in contact with the shell secretes proteins and mineral extracellularly to form the shell. Think of laying down steel (protein) and pouring concrete (mineral) over it. Thus, seashells grow from the bottom up, or by adding material at the margins. Since their exoskeleton is not shed, molluscan shells must enlarge to accommodate body growth. This pattern of growth results in three distinct shell layers: an outer proteinaceous periosteum (uncalcified), a prismatic layer (calcified) and an inner pearly layer of nacre (calcified).”

What determines a shell’s shape and color?

Shells are certain shapes and colors mostly for protection from predators.

The Australian Academy of Science tells us that:

“Some of the elaborate structural features in shells provide extra strength without making the shell extremely thick. Compare the ribbed and ridged surfaces of some shells, like scallops, with the corrugations in cardboard. Shells from tropical areas, where along with the diversity of food comes a diversity of predators, often have elaborate arrangements of spikes and horns that act as protection. Some shells are shaped in ways that help the animal embed itself within the sand or sediment, or to stop it from sinking too deeply.

One of the archetypal shell structures is the graceful spiral created by many gastropods. These shells generally consist of chambers in which the animal lives. As the animal grows, it needs a bigger chamber, and so it adds a new one onto the shell.

Shell spirals have an elegant geometry, where for any rotation angle, the distance from the origin of the spiral increases by a fixed amount. This is known as a logarithmic spiral. The other interesting thing about spiral shells is that the vast majority of them rotate to the right—they are dextral. Sinistral shells, whose spirals rotate to the left, are very rare. This hasn’t always been the case—the fossil record shows that the predominant direction of spiral shells has swapped back and forth throughout geological time.

It’s thought that tropical shells are more varied and colourful as a result of the greater diversity of food sources available to them as compared to their cold water counterparts, which generally exhibit darker, duller colours. Some colourings work extremely well as camouflage, allowing the animal to blend in with its surroundings and hide from predators. Some shells, like pipis found along the edge of the beach among the breaking waves, show large amounts of variations in their colours, similar to the variety seen in a beach strewn with pebbles. Some scientists also think that some shell markings act as a sort of guide to the animal for further shell growth.

But this doesn’t really explain all the variation we see in some shells’ colours—some shells live in the deep ocean, where the darkness makes a visual camouflage somewhat redundant. And the colouring seen in some shells, such as the deep purple of a mussel, are only on the inside of the shell, visible only after the animal has died.”

According to CoastalCare.org: “Some exceptions to the generalities above are echinoderms and crustaceans. Echinoderm means “spiny skin.” Examples of echinoderms are sea stars, sand dollars, and sea urchins. These animals have a hard exoskeleton made of calcium carbonate called a test. After the animal dies, the test remains intact. These easily recognizable skeletons called can sometimes be found in number on the beach.

Crustaceans like crabs, lobsters, and horseshoe crabs also have shells which can easily be distinguished from shells of mollusks.”

What shells can you take home from the beach?

You are able to take shells from the beach as long as there is no live animal in the shell. The FWC says: In Lee County, you may not harvest or possess any shells that contain a live organism except for oysters, hard clams (quahogs), sunray venus clams and coquinas. You will need Florida recreational saltwater fishing license is required in order to harvest a sea shell containing a living organism, even when harvesting from shore.

Telling if a shell is alive depends on the type of shell.  If it is a bivalve and it is closed it is alive, if it is open and closes on its own it is alive.  If it is a spiral shell mollusk you can tell it is a live by looking inside.  If it is empty it is dead and you can take it home.  If you find a sand dollar on the beach you can tell it is alive if is a deep brown to purplish color and it produces a harmless substance which turns the skin yellow if you touch it. If a sand dollar is a silvery white color it is safe to take home from the beach. Starfish have tiny tube feet that will move when alive.  Sea urchins have tiny spines, if it is “bald” then it is dead.

What are some of the shells you can find on Fort Myers Beach?

The Bailey-Matthews Shell Museum has a great shell guide to help identify shells!

When is the best time to go shelling?

It is probably best to go shelling during low tide first thing in the morning or after a storm that has been blowing in from the water.  The strong currents and winds blow more shells ashore after a storm.

Where are all the big shells?

The biggest shells are probably the heaviest and therefore they are most likely out at sea!  We need strong winds and currents to bring in large heavy shells.

Give a small shell a chance!  They have beautiful detail and colors as well!

What is the biggest shell ever found?

Tridacna gigas, or a giant clam is the largest shell ever found! https://www.sciencefocus.com/nature/what-creature-makes-the-biggest-seashell/