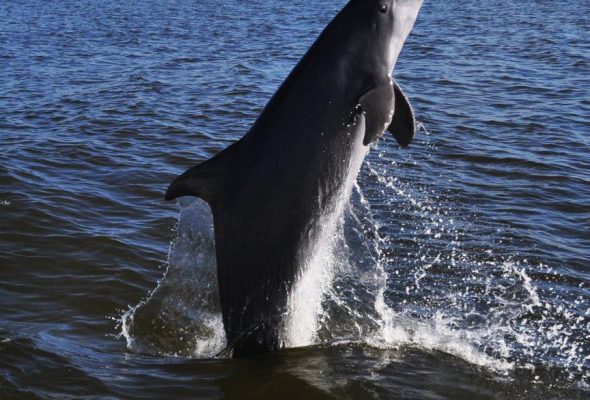 Bottlenose Dolphin: They call him Flipper

Did you know that Orca whales are actually the largest dolphin species?

Sciencing tells us “There are approximately 36 dolphin species known to humans today, found in fresh and saltwater environments across the planet Earth. Dolphins are a member of the marine mammal group known as cetaceans, which also contain whales and porpoises. Because of the many similarities between dolphins, whales and porpoises, in addition to the fact that ‘dolphin’ and ‘porpoise’ were once considered interchangeable terms, people have commonly been confused as to the precise number of dolphin species that exist.”

Even though most dolphins live in salt and brackish water there are a couple of species, like the Amazon River Dolphin, that live in freshwater streams and rivers.

Dolphins are extremely intelligent animals.  According to National Geographic: Until our upstart genus surpassed them, dolphins were probably the largest brained, and presumably the most intelligent, creatures on the planet. Pound for pound, relative to body size, their brains are still among the largest in the animal kingdom—and larger than those of chimpanzees. The last common ancestor of humans and chimps lived some six million years ago. By comparison cetaceans such as dolphins split off from the rest of the mammal lineage about 55 million years ago, and they and primates haven’t shared an ancestor for 95 million years.” Their intelligence is shown with their social behavior, the way they communicate (with a series of clicks and whistles), their use of primitive tools when searching for food and the fact that they can be trained.

Bottlenose dolphins eat fish, squid and crustaceans and swallow fish whole! An adult may eat 15-30 lbs of food a day. The Sarasota Dolphin Research Program states “Often dolphins capture their prey underwater with a high-speed chase. Sometimes dolphins feed cooperatively, teaming up to herd and capture prey fish. In the Bahamas,  dolphins are known to poke their head in the sand, probably trying to catch a buried fish.  When a chase by an individual dolphin ends with a quick tight circle, it’s called pin-wheeling, as the dolphin grabs the fish at the surface. Some dolphins do what is called “fish whacking.” This is a behavior in which the dolphin hits a fleeing fish with its flukes, launching it clear of the water for 20 ft or more. Then the dolphin leisurely swims over to swallow its stunned prey. Sometimes a dolphin will drive its flukes through the surface of the water , creating a noisy splash.  This a behavior called “kerplunking.” This is thought to disorient or disturb prey fish in shallow grass patches, making them easier prey. Groups of bottlenose dolphins in Georgia and the Carolinas are known to swim rapidly toward a mud bank in tidal creeks, pushing fish up onto the mud with the wave they create. The dolphins then slide up onto the mud flat themselves, snapping up as many fish as they can before sliding back down into the water.” It is important to remember that it is illegal to feed or harass wild dolphins!

Dolphins can live in groups or alone. Dolphins that live inshore usually live in small groups made up of about 10 dolphins, and dolphins that live offshore can be in groups from 10-100 dolphins! According to the FWC “Dolphins are often heard clicking. Contrary to popular thought, clicking is likely not communication, but rather the sonar system dolphins use for navigation, food-finding and avoidance of predators. Clicks are one of three classes of sounds dolphins produce, in addition to squawks (whose purpose is unknown, although these sounds are made while dolphins are socializing), and pure tones, one of which is known as that dolphin’s “signature whistle.” Dolphins cooperate in many ways, some species more than others. As a group they may guard against predation by sharks or support a sick or injured community member in the water by keeping it afloat. A few dolphins sometimes use the lengths of their bodies to encircle and pen a school of fish in shallow water, like horses rounding up yearlings, in order to feed. In addition, bottlenose dolphins often take turns feeding according to age, size, and health. Often two males of the same age form a lifelong pair bond and spend the majority of their time together, helping each other find suitable food and mates.”

We often see dolphins swimming and jumping in the wake of our boat. A lot of people ask us why, and really we don’t know but most researchers say it is simply to have fun! Surfer Today has a great article on some of the other reasons researchers believe dolphins ride waves!

Bottlenose Dolphins are a protected species.  NOAA Fisheries describes the threats to dolphins as interactions with fishing gear, habitat destruction and degradation, biotoxins, and illegal harassment and feeding activities. “Bottlenose dolphins are easy to view in the wild, but this also puts them at increased risk of human-related injuries and death.  Feeding and attempting to feed dolphins is harmful and illegal because it changes their natural behaviors and reduces their wariness of people and vessels.  They learn to associate humans with an easy meal and change their natural hunting practices by begging for handouts and taking bait/catch directly off fishing gear. Dolphins also teach these unnatural and risky feeding strategies to their calves and other dolphins.  Dolphins are then more vulnerable to vessel strikes and to fishing gear entanglements and ingestion. They also may fall victim to extreme retaliatory acts (such as shooting) by frustrated boaters and fishermen. Dolphins may also be disturbed or harassed by the presence of humans and watercraft. Harassment is illegal and occurs when any act of pursuit, torment, or annoyance has the potential to injure the animal or disrupt its s behaviors. Any human-caused change to a dolphin’s behavior may constitute disturbance or harassment. Certain critical survival behaviors are particularly vulnerable, and disturbance may lead to injuries or death.  Long-term negative impacts include compromised health, reduced reproductive success, and displacement from, or avoidance of, important habitats.” (NOAA Fisheries)

Seeing a dolphin is always very exciting, but remember to never feed or harass dolphin.