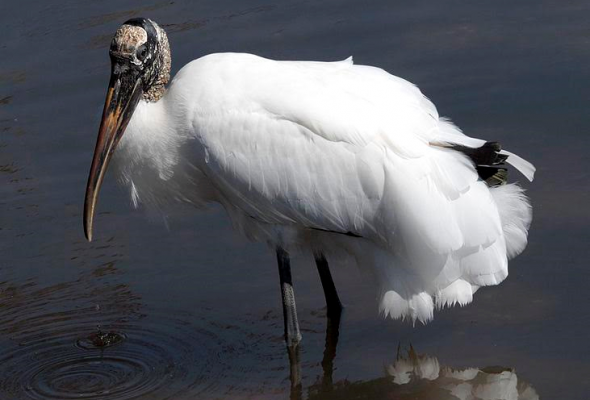 Visitors and residents to South west Florida can enjoy seeing many different species of birds.

Summertime stirs up lots of sizzlin’ outdoor adventures in Southwest Florida, especially when you’re out on one of Good Time Charters fishing charters, cruises or tours. Whether it’s our Coastal Sealife, Shelling and Dolphin Cruise or Stand Up Paddleboarding Tour, you are guaranteed a memory that’ll be uniquely yours, especially when you spot one of our endangered feathered friends along the way.

The Wood Stork is of particular importance as it is an indicator species of the Everglades ecosystem. These 3’ tall birds are easily spotted by their bald, black heads. Initially listed as endangered in 1984, as of 2014 these birds have an improved listing of ‘threatened’. The downlisting results directly from over 30 years of conservation efforts. Although the Wood Stork’s population has improved in the Everglades, they still battle nesting issues. Lack of enough pooling fish (each mating pair needs 440 pounds of fish during mating season), and diversion of the area water into water control structures, has impacted their ability to maintain larger numbers in the ecosystem where they lived by the thousands prior to urbanization in South Florida. In the 1930’s there were as many as 15,000 mating pairs of Wood Storks.   Conservationists continue to work tirelessly to restore the Wood Stork’s idyllic breeding environment in hopes of raising the numbers back near 2,500 breeding pairs. Come with Good Time Charters for an authentic, good time and spot some of these threatened birds along the way!

For more about the ongoing conservation efforts of these and all the endangered and threatened animals of the Everglades, check out Friends of the Everglades where you can learn how to get involved, how to help and to contribute.