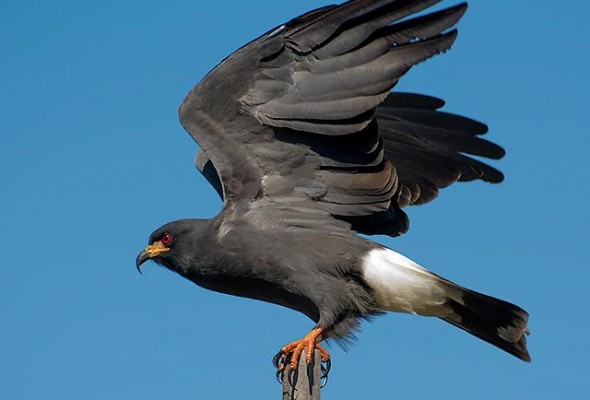 At Good Time Charters, we adore our adventurers and all the one of a kind days we have taking friends, old and young and new or old alike, on any of our fishing charters or tours and cruises. Paddle boarding, kayaking, or nature cruising for wildlife and sea shells makes memories for a lifetime and offers the possibility of spotting our native, endangered raptor ~ the Snail Kite.

The beautiful Snail Kite, previously known as the Everglades Snail Kite, found itself added to the endangered species list in 1967. With the draining of the wetlands, the Snail Kite’s territory previously expanded from the Everglades to just south of Tallahassee has shrunk considerably as these birds of prey hunt for their limited diet of apple snails. Although their population is stabilizing, are considered extremely vulnerable as droughts and habitat loss rattle their fragile living environment. We are thrilled to have these raptors join us any day, as they are a rare gem to spot out here.

We love to watch for them to swoop down and fly low over the Everglades wetlands in search of their next meal. When they find a snail, they do a bit of a dance on the water, snatch up their snail, and take flight again. A really hungry Snail Kite can manage to manipulate and eat his feast in mid flight, though they more often will land on a high perch to take care to get all the yummy from the shell with its slender, curved bill specifically designed for capture of the apple snails.

August brings the end of their breeding season, but some are still out there waiting on hatchlings to emerge. For the Snail Kites that are done with breeding season, they are transitioning into resting and winter season behavior. Many will form communal groups until breeding season resumes in December.

Whatever you’re overcome with a spark of adventure, let us be a part of it at Good Time Charters, Fort Myers Beach, FL. Click here or call us today at: 239-218-8014.