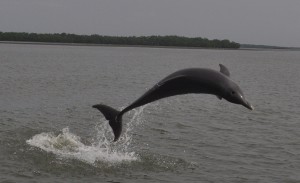 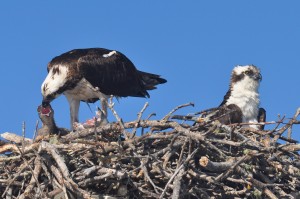 We love Estero Bay Fort Myers Beach! There is always wildlife around and I ain’t talkin’ about visitors from Minnesota! Although, they are known to be wild, haha. The Osprey are nesting and we are noticing that many have laid their clutch. So hopefully, in a couple months we have some cute baby Osprey to see. One Osprey couple, Vicki and Earl (depicted in the picture from last nesting season 2011), we have been observing for a few years now and they have this whole nesting thing down pat. They meet up around November, Earl rebuilds the nest to Vicki’s liking, they do a little dance, and wallah! Vicki sits on about two or three eggs while Earl brings her yummy fish to fatten her up. Now, I have read that they take turns doing this but I think Vicki is a bit of a control freak and prefers to squat on the eggs herself. The chics hatch, the strong survive, Earl works even harder to feed all of them, Earl gets skinny, the chics fledge, and Vicki and Earl say see ya til November! And they part ways to spend the summer apart. That’s it in an eggshell! Well, Ain’t life Grand. Speaking of a grand life, I spent the past weekend in my hometown of Jacksonville, Fl to visit my Grandma for the last time. Now, Grandma and I didn’t have that typical Grandma-Grand daughter relationship, and I really don’t know what to call it. She wouldn’t offer milk and cookies, but Chivas, Chivas on the rocks rather, and she would say “Just because I don’t hug you, doesn’t mean I don’t love you”. I never to this day have developed a liking for Scotch, I’m more of a cold beer with a shot of bourbon on the side kind of gal. My first visit to SW Florida was with Grandma, and I fell in love with the place. Actually, she introduced me to a lot of cool things like opera and poetry. What a cool lady. I got the news today while out on my Coastal Sealife dolphin and shelling cruise that she passed away this morning at 96 yrs old, peacefully, with her children by her side. What a great group of folks I had on my tour this morning too, thanks Peggy, Karen, and Greg for joining us and bringing your friends and family! You guys were a pleasure to have out with us. This morning was less than ideal, east wind, overcast, not warm, but the dolphins put on quite a show for us, and we had a nice time at the island looking at all the sea stars and conchs. A great morning on the water with a great group of folks! Well, it is supposed to get cold here this weekend, only a high of 70 on Sunday! Yikes, I might have to break out my jacket! lol- Cristina and the rest of the Good Time Family