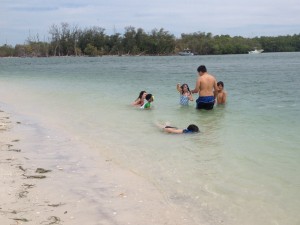 Well, today is so beautiful it is hard to think that just a couple days ago Tropical Storm Debbie was upon us. Until yesterday, we haven’t been out since Saturday morning due to all the heavy rain and high winds. During my down time, I have watched a lot of movies -went to see the Avengers twice in fact, practiced my crow pose, and have had some heated dominoes tournaments with Capt Mike. It sure has turned out to be a beautiful week and the forecast for the upcoming week looks nothing shy of perfecto! Have had some very successful charters since we have been up and running again. The dolphins were very playful and we saw our usual resident Fort Myers Beach dolphins out. Floppy and her gang were busy feeding and chasing fish, while Notch and her gang were more interested in us and swimming alongside our boat. We also saw manatees throughout the day and as we drifted with the engine in neutral we got some excellent views of them very close to the boat. What a treat! We also had a kayak tour yesterday and those folks had dolphins swimming very close by as they were feeding on the flats that we were traversing. I attached a pic from a recent dolphin and shelling cruise. The kids were having such a good time swimming and finding sea stars and I really enjoyed their enthusiasm and curiosity. Capt Mike has been fishing around Fort Myers Beach and catching quite a mixed bag, mainly of redfish, snapper, sea trout, flounder, and black drum. All of which are delish! A family he had out on a recent fishing charter brought their youngest daughter, she was maybe 6 or 7 yrs old, and she told Capt Mike she had only fished before on a video game. Now I don’t know a lot, not even a little, about video games, so I have no idea what Virtual Fishing would be like. Anywho, Capt Mike got her on some fish and she got so excited trying to reel them in and all the while cheering “I’m fishing for REAL! I’m fishing for REAL! This is my lucky day!” We love it! She was such a cutie! Well folks, I need to go get some rest before today’s adventures! Thanks for reading and we hope to have you out on the water with us real soon! – Cristina and the Good Time Crew