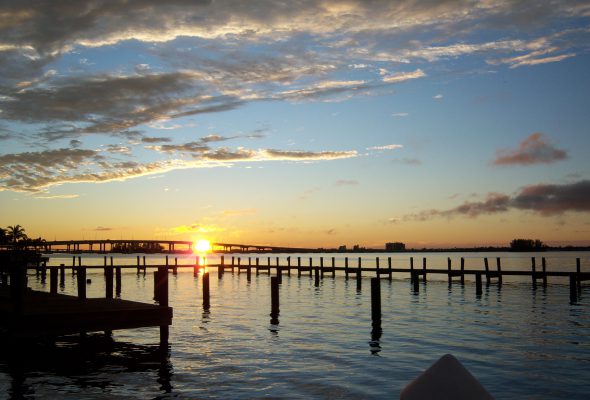 Just several miles north of our location at Snook Bight Marina lies the beautiful Caloosahatchee River, a major waterway and artery for Lake Okeechobee that brings water from the North down to our area on the west coast of Florida. The Caloosahatchee is an integral part of the delicate ecosystems that call Fort Myers Beach their home. The Caloosahatchee has been a large part of life in Southwest Florida for thousands of years. Used by the Native Calusa Indians and other local native tribes as a major highway traveling for trade and hunting. Fast forward to the early 20th century and the river continued to be used for transporting goods, services, and livestock from the inland farms to the coastal areas where items, such as cattle, were loaded up for shipment up North by rural settlers.

The river itself starts at Lake Hicpochee and runs 68 miles down to its mouth in Fort Myers. All along the riverfront, you can almost be transported back in time as there is little industry and long lazy tributaries emptying into it with live oaks hanging with exotic Spanish Moss. Today motor craft, kayaks, canoes and paddleboards are seen along with many anglers who are waiting for that one big catch.

Along its winding path, there are several Oxbows. Oxbows are footprints of the original path of the river, which has changed over the millennia. The Orange River, another local river that connects with the Caloosahatchee hosts dozens of manatees in the Winter months escaping the cold water for the warm water produced by the power plant upstream.

The bird watching is phenomenal! Enjoy a day on the water with your binoculars and discovery this amazing bird paradise.

Try the Caloosahatchee waterway out you won’t be disappointed!