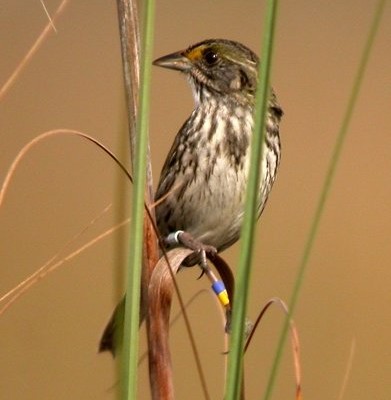 At Good Time Charters, we are passionate about giving our guests the best adventures that will make memories for a lifetime. We also inspire to educate about the fragile Everglades ecosystem and the endangered or threatened animals and plants that live here, which is why we formed our sister company Everglades Adventure. One such special critter we may catch sight of during a trek into the Glades is the Cape Sable Seaside Sparrow.

Everglades National Park is home to one of eight remaining subspecies of Seaside Sparrow, the Cape Sable Seaside Sparrow, which is named for the southernmost point of land in the continental United States. Once upon a time this nonmigratory bird lived just about everywhere in South Florida, but the current known habitat of this endangered sparrow is restricted to five separate subpopulations.  Due to habitat sensitivity, this precious bird is the only bird limited specifically to the Everglades ecosystem.

Listed as endangered since 1967 and nicknamed the ‘Goldilocks bird” due to it’s very specific habitat needs, this tiny bird has depopulated because of the many habitat-changing events that have occurred, including water distribution alterations and hurricanes. Changes continue to threaten the Cape Sable Seaside Sparrow with extinction. In an ongoing attempt to grow their numbers, their habitat is maintained by prescribed fires, and water levels are regulated to benefit the sparrow. Water management in the Everglades has been controversial because of possible negative impacts on other endangered species and human land uses.

The sparrows build cup-shaped nests about six inches off the ground, thereby making their nests vulnerable to even moderately high floodwaters and to predation by snakes and rats. Cape Sable seaside sparrows are not diet specific.  They are found taking advantage of any food available as they forage low in the grass and on the ground. They feed on grasshoppers, caterpillars, beetles, spiders, and grass and sedge seeds. Adults remove the legs and wings from insects before feeding them to their young.

Let Everglades Adventure be part of your next ‘once in a lifetime’ Everglades fun and fact filled adventure experience!