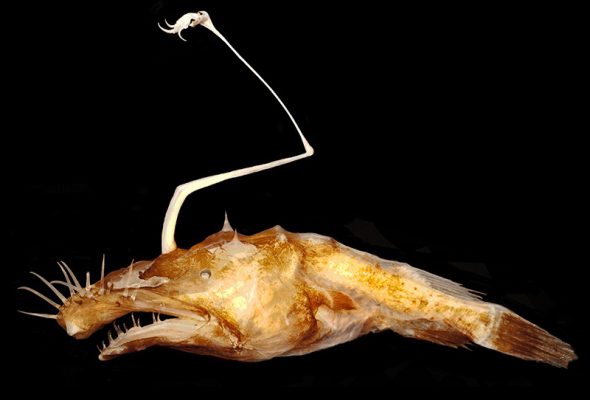 A Year Of New Discoveries Comes To An End

Another year comes to an end! It was another great year for us on the water, especially when we were able to celebrate the 50th anniversary of Estero Bay preserve last month. We would also like to highlight another great accomplishment made in 2016. The prestigious International Institute for Species Exploration has announced their top 10 new species of 2016. Each year, this group selects 10 of the most interesting new species of animals discovered annually all over the world with the aim of educating the masses while promoting conservation.

This year, one of our locals made the list! Discovered earlier this year in the Gulf of Mexico, Lasiognathus dinema, an anglerfish, was added to the list because of its, let’s say, unique looks. Full grown at approximately two inches this fish is considered one of the “ugliest” discoveries made this year—but we will let you decide if you would like to pass such a harsh judgment on this little guy!

It was discovered during an investigation conducted by the National Oceanic and Atmospheric Administration.

Anglerfish have extremely unusual structures on their bodies called the “esca”. The best way to describe this feature and its function is to imagine the esca as a fishing pole attached to the fish’s body. The organ projects over the head of the anglerfish, just as a fishing pole projects over a body of water. The anglerfish have developed a series of spines that aid and support a modified dorsal fin from which the esca projects. Some anglerfish are even more special! In some species’ esca, bioluminescent (glowing) bacteria will cozy up inside the fishing pole like organ. This light will further attract prey and will easily lure these creatures to a position right in front of the angler fish’s mouth.

These anglerfish generally reside in the deeper waters of the Gulf of Mexico, but you never know what may come up on the end of your fishing pole!

Cheers to 2016 and we hope we will see you again in 2017! Who knows—maybe we’ll discover another species to be included in the Top 10 list for the New Year!